While reading One Way Out a really strong, engaging oral history of The Allman Brothers Band, I began thinking about all the great music I grew up with, and how so much of it is now being relegated to fading memory. I believe it deserves more, so I am going to revisit these albums, and write my impressions, share the memories they conjure, and I hope they spark renewed interest in the music and stir up your memories of when and where you were when you heard this great art. Please feel free to share those memories and your impressions of the music here. Let’s keep our love for the work of these great artists. 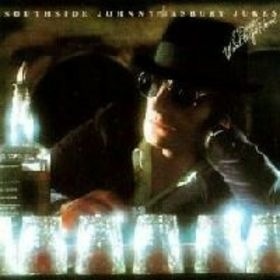 This wasn’t the plan. The plan was to revisit Bruce Springsteen and a The E Street Band’s classic “The Wild, The a innocent, and a The E Street Shuffle” but Fate stepped in, all blonde hair and tan, swinging a frosted beer in one hand and dancing to an entirely different set of classic Jersey music.

Somehow, someway, I selected Southside on my beloved old IPod-With-Everything-On-It, plugged into the beat-up system on Tyler’s Jeep Liberty.
From the first notes of the title track, I was swept back in time to summers in The Bronx, where this album made our concrete birthplace a little sunnier, the hard ground a little sandier, the possibilities of the night just a little better.

Tyler’s car has never sounded better, no matter what he says.

I credit warmth and intimacy and eternal summer nighttime groove of this album to the incredibly tight, free, naive band who clearly had no idea they were this good (because, while they subsequently enjoyed bigger hits, they never again sounded as pure), and to then Miami Steve Van Zandt, who produced this classic document of the pure Jersey sound.

Rock, blues, R&B, comedic jive, it is all here. The mighty Jukes can swing happily, wrench hearts full of pain, boast jauntily, create anthems, and, especially on this album, guarantee a damn good time. “I Don’t Want to Go Home” is all that, with Southside’s great Everyman voice, great harmonies, killer rhythm section, and downright glorious horn section. It is impossible to feel bad when they play. Impossible. This is a band of survivors, heirs to the chicken circuit blues,en of so long ago, care taking the legacy of the working musician. It is all there behind the music on this album, but we just didn’t know it at the time. We were too busy celebrating in the sound of summer hopes and dreams and nighttime boardwalk mischief.

Here’s the album’s tracks: I Don’t Want To Go Home, Got to Get You Off My Mind, How Come You Treat Me So Bad, Fever, Broke Down Piece of Man, Sweeter Than Honey, Fanny Mae, It Ain’t The Meat (It’s the Motion), I Choose To Sing The Blues, You Mean So Much To Me; not a top ten hit in the bunch, but this is a solid gold, wall-to-wall, must-have classic for true classic rock fans. Some may argue this status and to that I will allow underground class, but classic nonetheless.

This is an album listener’s album, one in which each song sets up the next, offers both a continuous background for a beer party, and a shoulder to lean on when all alone. Sounds great on a killer stereo and a crappy car system and, in the rarest of cases these days, on the radio. And it still sounds wonderful live.

Ironically, this collections sounds more like the live band than the bigger hits which were progressively more highly polished and, to my ears at least, more distant. Are the hits enjoyable? Definitely. Checkout an early greatest hits package, Havin’ a Party With Southside Johnny: I Don’t Want To Go Home, Broke Down Piece of Man, Talk To Me, Love On The Wrong Side Of Town, Fever, Trapped Again, Without Love, When You Dance, This Time It’s For Real, Havin’ A Party; great collection, but listen to the three tracks from this debut album alongside the bigger hits and you can hear they are more intimate, closer, more immediate. The other songs are great, don’t get me wrong, the first albums just … Classic.

Same goes for a later hits package, All I Want Is Everything: I’m So Anxious, All I Want Is Everything, Vertigo, Paris, Living in the Real World, Why, Long Distance, Love When It’s Strong, Why Is Love Such a Sacrifice, Murder, Trash It Up, Captured, New Coat of Paint, Walk Away Renee, Little Calcutta, All I Needed Was You, Better Days, It’s Been A Long Time

The interesting thing here is that the later tunes on this collection have a sound that starts making its way back to that right-in-the-room-having-a-beer-with-you sound d of the first disc. And on more recent, independent label albums, Southside and the guys do sound more like their first album, free to tackle whatever style I spires them and offers that deep connection to their audience,

The survivors have survived. Their website offers the newer stuff directly. And it all sounds great … alongside this forgotten classic.

My name is Christopher Ryan. I am a former award-winning journalist turned high school teacher, and I have written since reading S.E. Hinton's THE OUTSIDERS when I was in elementary school. I have independently published an award-winning debut novel, CITY OF WOE, plus the prequel short story collection CITY OF SIN, the sequel novel CITY OF PAIN, a high school thriller novel GENIUS HIGH, and several high adventure novelettes for the Rapid Reads series featuring Alex Simmons' African-American adventurer BLACKJACK All are available via amazon.com, as is my children's book, THE FERGUSON FILES - THE MYSTERY SPOT. Additionally, I was nominated for a supporting actor award for my work in the multiple award-winning independent film, CLANDESTINE, from Feenix Films. I blog about writing, life, pop culture, the journey of learning to promote my independently published work, my efforts to secure a traditional publishing contract, and my career as a teacher.
View all posts by chrisryanwrites →
This entry was posted in America, love, Music, pop culture and tagged #classicrock, #Jersey, #Jerseyrock, #music, #rocktalk, #seventies #Bruce #LittleSteven, #SouthsideJohnny. Bookmark the permalink.