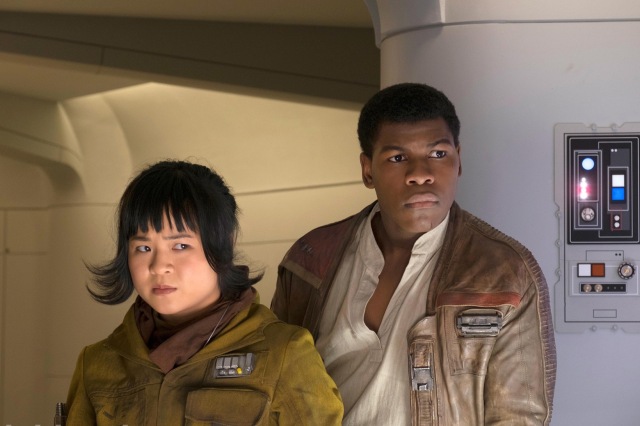 Star Wars: The Last Jedi has experienced both tremendous box office success and outraged fan complaints. Same old, same old, right? Actually, no. Respectfully, it is worth noting that the elements fueling most fan fury can also be viewed as impressive successes for the film. Further, these elements allow the hallowed franchise to make some serious commentary on current culture.
While some fans are gathering signatures in an attempt to amputate this film from the SW canon, the core of their complaints can be viewed as the elements that move the franchise forward. While the previous entry into the main saga, The Force Awakens, was criticized for being too much of a retread of earlier films in the series, the same definitely cannot be said about The Last Jedi, as screenwriter/director Rian Johnson breaks from the past every time he gets the chance.

Some suggest these changes are slaps at The Force Awakens director JJ Abrams, but, as Abrams served as producer for The Last Jedi, it seems hard to believe he didn’t approve every innovation. Secondly, Kathleen Kennedy has not hesitated to switch directors when the overall needs of the saga and the franchise have not been in sync with directorial intention. Those two facts should put to rest the arguments that Rian Johnson went off the reservation unsupervised.

So what are the alleged problems with The Last Jedi? Let’s look at one source of online ire.

Some segment of the SW fan base seems to absolutely hate Rose, which is incredulous since in a very real way, Rose is us. She gets emotional when the Rebels suffer losses (especially the death of her sister, which positions Rose  further as our representative in the Rebel family), she defends the Rebels (zapping Finn, whom she just identified as a hero, as soon as she realizes he is trying to desert), and is immediately willing to literally fly into the enemy’s power base and face almost certain death when she realizes her talents might help the rebellion.

These attributes traditionally define SW heroes. Although the big three had to be convinced, Luke, Han, and Leia each are at least partially defined by exactly these traits. The same can be said for Obi-Wan Kenobi, Q’in Gon Jin, Mace Windu, Lando Calrision, and, more currently, Po Damarron.

So what is the problem with Rose? Is she a traitor? Unwaveringly no. Reckless? Only in the best SW tradition. Naive? It can be argued that she is more cynical than all the original characters except Han. Less than stellar acting? This franchise has dozens of examples of weak acting that has been overlooked in service of the greater appeal of the films.

The remaining argument seems to be that Finn and Rose’s subplot “goes nowhere” and has no impact on the main story. Again with respect, there is an opportunity to see this subplot as a crucial element of two main themes. First, Rian Johnson uses this film to refocus our attention from fan expectations and simplified good vs. evil mythmaking to a more sophisticated idea that no one group is perfectly pure, the ongoing battle of opposing views in an endless war is doomed to only purpetrate further destruction, and morality is more accurately defined as shades of gray.

While chasing their McGuffin, Finn and Rose learn that the corrupt rich supply both sides of the galactic battling, exploiting the war for no higher cause than their own greed, and are more than willing to let billions die to finance their elite indulgences. This not only deepens the Star Wars saga but pushes the audience to rethink who the enemy really is. In our current political climate of constant accusations hurled at opposing parties, the erosion of reality via fake news, and the continuing enrichment of the one percent, this statement is a daring comment to make from such a safe franchise.

The maturing of SW is furthered as Finn and Rose meet DJ, a scoundrel we are tempted to equate with Han Solo, except that he gets his payoff from the First Order rather than the Rebels, doesn’t come back to save the day, and backs up his Hanian cynicism with proof that both sides are doing business with the same arms dealers whose only goal is to profit from the war. He tells them that while the First Order might win today, they’ll win tomorrow, but it doesn’t matter, the rich will keep them fighting. He advises them “Don’t Join” (his name is DJ, get it?), and leaves with his payment as Finn and Rose fail.

Which brings us to the other major theme of the film; failure is never worthless. In Finn and Rose’s case, failure allowed them to stomp the rich a little, free some abused animals, and inspire at least one Force sensitive child to whom Rose gives her Rebellion ring.  It also seems to have changed Rose’s understanding the cause, from loyalty to the Rebels in defeating the evil First Order to winning by “saving what we love” another alternate view of what this 30-year film franchise has been about.

So here we see that while Finn and Rose may have failed in their mission, their actions deepened our understanding of how this universe really works, matured the film as a whole, and possibly sowed seeds for future Star Wars sagas.

Admirable achievements, from a certain point of view.