Neil Young – The Troubling Duality of “Everybody Knows This is Nowhere” 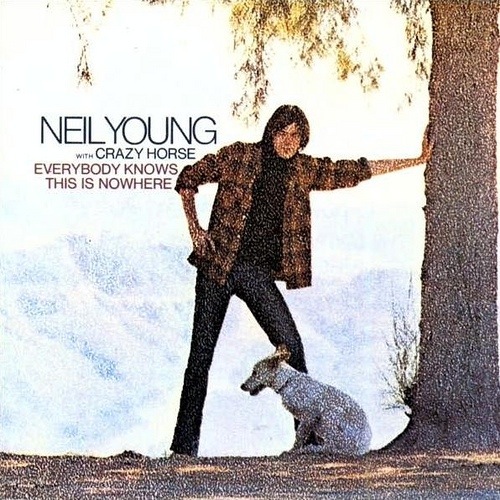 It is impossible to pick the definitive Neil Young album because he has put out so many classics. Some will say the easy choice is Decade but I am working with a rule that anthologies and greatest hits and live albums are separate entities. We will discuss some classics from those categories at a later date, but for now we are discussing classic albums of once new work from artists we want to celebrate.

Neil has too many that fit into this “classic” criteria. So I have to resort to personal choice for favorite classic Neil. And that is Everybody Knows This is Nowhere. Yes, I love Harvest, and On the Beach, and Tonight’s The Night, and so many more, but the all time most classic for me is Everybody Knows This is Nowhere. One of the reasons is because there is a troubling duality to this work; it is at once gloriously light and free, but at the same time can be seen as something very, very dark. After all these years, I still hear both, and it continues to fascinate.

“Cinnamon Girl” lets us know, from the first thickly fuzzed, slightly sloppy chords, that we are in vital territory. Neil always sounds especially right with Crazy Horse, and here he creates an ode to the ultimate band girlfriend, a woman as ephemeral as all of our romantic dreams. We never find out much about her beyond “my baby loves to dance” but the speaker is clearly attracted. And here we have our first hint of trouble. This song is more about the speaker, “a dreamer in pictures, I run in the night” and the lyrics suggest there may be more than one girl who fits his profile, “the drummer relaxes and waits between sets for his cinnamon girl” and “I could be happy the rest of my life with a cinnamon girl”. She is an ideal, a specific type, and only in retrospect later in the album does this become worrisome.

Perhaps my favorite Neil song ever (and that is saying a lot) is “Everybody Knows This is Nowhere”. I knew most of the other songs in this album from Decade, but one hot summer hanging out in Roger’s family apartment, drinking beers to cool down because there was no escaping the baking heat inside or outside the lab rat maze that was Parkchester in The Bronx, he tossed this album on, and it became the soundtrack of that summer. When I met this song. I was not a country music fan, but this is indisputably country, with a catchy Neil guitar hook, and lyrics that spoke directly to how we felt about where we lived. It just vibrated summer, and made the place more livable. Even today, as I enjoy where I live, this song transports me to that summer, in that place, with that beer, and I am grateful for the trip. However, the ideas in this song, the boredom, the lunatic “lalalala lalalalas”, they all flip on the listener later, as does the coda “everybody knows, everybody knows….”

“Round & Round (It Won’t Be Long)” extends that summer feeling while also thickening this loose plot of boredom and the slightly asylumesque undertone; this song could go either way. Easy going and lyrical, this mellow tune is a dream starter, almost hypnotic in feel, with just enough hints about dealing with your own shortcomings to inspire some quiet reflection, or maybe something more … off. Even the backing vocals here that are always slightly behind Neil, like Robin Lane is singing with the radio, or is out of phase with the speaker’s narrative about “losing inside”. And then there is this: “How slow and slow it goes, to mend the tear that always shows, it won’t be long, now the hours will bend through this time that you spend ’til you turn to your eyes, and you see your best friend looking over the end, and you turn to see why, and he looks in your eyes, and he cries…”

“Down By a The River” is so many things at once; mellow groove, masterful coming together of the Neil Young and Crazy Horse sound, classic harmonies, and the soft, calm narration of …. a murder?

This has been a question considered, discussed, and grooved to for the song’s entire history. Neil is not a violent man (Crazy Horse solos aside), and these lyrics stand apart from his usual topics, and can be troubling if considered too closely. (I would have hated to read about some guy who was high and listening to this when he did violence to his girlfriend. Thank God I never have). But this track is so disturbing it alters the perception of the rest if the album.

Meanwhile, the band embarks on one of the all-time great slow jams of the era, and definitely of Neil’s career, allowing us time to consider, really consider, the lyrics. That basically one-note lead doesn’t give us much relieve either, allowing us to focus on what is going on here, and maybe suggesting a bit, too. Talk about saying a lot with a little.

And then the soft, calm, mournful Neil voice is back, “This much sadness is too much sorrow, it’s impossible to make it today….” Somehow perfect, and worrisome again because it leads into the troubling chorus, “Down by the river, I shot my baby…”

The second instrumental break is more elaborate. I suspect Danny Whitten takes lead here, but I am not sure. In any event, this is Neil and Crazy Horse at their musical best, at least for my ears and soul.But the lyrics, oh those haunting lyrics, “She could drag me over the rainbow and send me away,” followed by repeated confession. If a murderer confesses his crime where no one can hear him, is anyone saved? Or safe?

“The Losing End (When You’re On)” is another country song, though the lyrics are universal. The singer is looking for someone, talks to some others, bums about it being “so hard to make love pay when you’re on the losing end, and I feel that way again.” We understood this feeling even before our own heartbreaks, when we were yearning for that unapproachable girl, or whatever, or in fact going through our own break ups. But he’s also kind of pulled us in as accomplices. If this song is taking place after “Down by the River” and if it is the same speaker, suddenly we are in the head of a murderer after the deed, and wonder exactly what he is doing. And, having recognized ourselves in the lyrics, what does that say about us?

“Running Dry (Requiem For The Rockets)” is another misty, ghostly Neil tune, with Bobby Notkoff’s violin weaving around this mournful song of remorse, but who’s remorse? “I left the girl I loved with water in her eyes… I’m sorry for the things I’ve done, I’ve shamed myself with lies, cruelty has punctured me and now I’m running dry, I’m sorry for the things I’ve done, but soon these things are old and done and can’t be recognized.” I always wondered if the speaker here is the same guy from “Down by the River” mourning, then rationalizing himself away from guilt and responsibility before moving on to the “Cowgirl in The Sand”. If so, this album takes on an ominous undertone. I hope not…..

“Cowgirl in The Sand” starts out as if the band is just fiddling around, then boom, we are there, walking up the dune to the beach. This opening instrumental prelude can be cool, or, if we consider the meaning of the last few songs, it can be heard as the soundtrack for the killer arriving and stalking his next prey. “Hello cowgirl in the sand, is this place at your command?” The weight of this theory is too much; I prefer to argue that the narrative does not hold up (though the minor notes in the song can be offered as threatening this poor girl). Lyrically, this song is merely a come on, a hello, a hope that something connects and the cowgirl will pat the blanket next to her and invite the speaker to stay. But the edge of the long interlude, the attack of that guitar solo, opens darker possibilities. What if these were the come on lines that the speaker used when he met the girl who ultimately ended up “Down By a the River”? For that matter, is that song telling the fate of the “Cinnamon Girl”? It is too much to consider, but the dark music….

This is a testament to the power of “Down by the River” that I am still worried four songs later. And that it flips the whole album for me. So, is this a beautiful album full of love and hope and escape from boredom, or is it a concept album told from the perspective of a serial killer?

Neil, after all these years, you are still killing me….

I do my best to tell fast-paced stories with humor and heart. My fiction work is available on amazon.com. Here, I’ll write about the sources for those stories from what I read, watch, listen to, and observe to my experiences as a former award-winning journalist, high school teacher, actor, and producer.
View all posts by chrisryanwrites →
This entry was posted in America, love, Music, pop culture, writing and tagged #classicrock, #CrazyHorse, #murder, #music, #NeilYoung, #rocktalk. Bookmark the permalink.