There will be no spoilers here.

Plain and simple, Daredevil Season 2 may be the best project Marvel has produced. Epic storytelling on both a gritty street level and global scale, these 13 episodes weave at least eight intriguing plot threads together with admirable dexterity, clarity, and balance. Truly impressive.

The writing emerges from comics, rises through Martin Scorcese’s taxi driving mean streets, and stands shoulder to shoulder with any of the great tales of American Myth. The cinematography is by turns intimate and breathtaking, gritty and elegant, thrilling and heartbreaking. Every performance absolutely crushes. Netflix could easily have three series come out of this stunning tale.

As for the subtexts and dynamics and thematic morale wrestling match, bravo. Lots to chew on, all moral cores are well established, organic to the characters, and debate the eternal argument of justice without letting anyone off the hook, including the audience.

All this, and it is also a thrill ride from start to finish. Batman V. Superwho?

This is an amazing time to be a fan of genre and stories and American Myths, and Daredevil Season 2 stands among the very best. 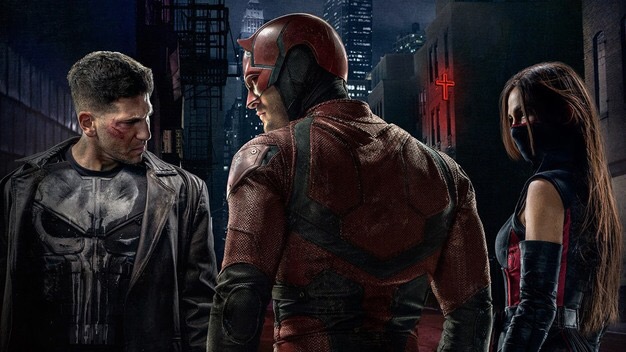 My name is Christopher Ryan. I am a former award-winning journalist turned high school teacher, and I have written since reading S.E. Hinton's THE OUTSIDERS when I was in elementary school. I have independently published an award-winning debut novel, CITY OF WOE, plus the prequel short story collection CITY OF SIN, the sequel novel CITY OF PAIN, a high school thriller novel GENIUS HIGH, and several high adventure novelettes for the Rapid Reads series featuring Alex Simmons' African-American adventurer BLACKJACK All are available via amazon.com, as is my children's book, THE FERGUSON FILES - THE MYSTERY SPOT. Additionally, I was nominated for a supporting actor award for my work in the multiple award-winning independent film, CLANDESTINE, from Feenix Films. I blog about writing, life, pop culture, the journey of learning to promote my independently published work, my efforts to secure a traditional publishing contract, and my career as a teacher.
View all posts by chrisryanwrites →
This entry was posted in #adventure, America, comics, fiction, film, Marvel, Marvel Cinematic Universe, pop culture, super-heroes, Uncategorized, writing and tagged #Daredevil, #DaredevilSeason2, #Elektra, #Marvel, #MarvelCinematicUniverse, #Punisher. Bookmark the permalink.