Posted on January 3, 2015 by chrisryanwrites

Many authors will say that among their best writing experiences are the times when characters seem to take over and write themselves. Some consider this channeling, that is, serving a muse or some higher authority’s desire for expression.
Maybe so, but maybe an equally powerful explanation is that these moments are the result of an author really knowing her or his characters. The truth is, the better an author knows the material, the easier it will be to write with authority.
One element of the writing process that must not be overlooked if we want these moments to occur is prewriting. Non-writers often think that when a writer isn’t at the keyboard s/he is goofing off. Not true. Dickens walked ten to twenty miles a day, looking at London and “seeing” his setting, his characters, his stories with each step. I once attended a talk by Joyce a Carol Oates wherein she spoke about her process of “running” her novels. She explained that she never wrote a word of any project until she could begin her run, and “watch” her story at the same time. If she came upon a problematic point, she’d ponder it until resolved, then “rewatch” the next day. Oates said that once she could “watch the story from beginning to end, then she could begin writing or “transcribing” it into a novel.
This is what I mean by knowing your characters. The more we know about them, the better we can write about them with facility.
So, how do we get to know our characters? What goes into building that skill set? Mostly, reading, listening, and experiencing other people, to be honest. And nothing is off limits. Read everything. Watch everything. Listen. Walk around the world and let it in.
My methods of getting to know a story and characters have evolved over the years, combining all of the above with elements of what I have studied. There is still a bit of Sydney Field’s plot paradigm in my process, a dose of Robert McKee’s STORY advice, a foundation of Joseph Campbell and Christopher Vogler, advice from Stephen King’s ON WRITING and Elmore Leonard’s TEN RULES FOR WRITING, and lots more.
I’ve used much of what I learned in workshops including Writer’s Bootcamp, ThinkTank, and wisdom from the many authors who appeared at the South Hampton Writer’s Conference, ThrillerFest, as well as one of the first BuffyFest’s studying the works of a Joss Whedon and all the publications that have come out of that ongoing celebration. I’ve gobbled up publications (Writer’s Digest among them) and a diverse collection of podcasts (I learn as much from Kevin Smith’s podcasts and I do from those focusing more exclusively on writing). Add to that nonfiction work on the area I am writing about, from police work to the supernatural to comedy, and it is like undertaking Independent study on a graduate level.
To all this, I have added iTunes.
These days, I create playlists for different characters or the novel in general, with songs chosen that reflecting the journey or journeys being developed. Then I walk and listen, do chores and listen, chill and listen. There is no to-do list, I just listen and think about where this character is on his or her journey. Sometimes the Playlist has to change as a song hits my ear wrong or interferes with the character flow established. We must always do whatever serves the character and the story.
By the time I get to the writing table (I once was gifted a desk from my brother that was slightly smaller than an aircraft carrier, and I got used to all that space and once that desk died of old age, I began to use a large table –Whatever works), I know those characters so well, and the story points are so clear, that the work flows fairly easily.
Recently, I got to write someone else’s character, Arron “Blackjack” Day, an African-American soldier of fortune set in the 1930s, created by Alex Simmons. Here I couldn’t create a character out of my imagination, I had to adapt my imagination to Blackjack’s well-established history. Again repetition and immersion bred facility, as I reread Alex’s previous works about Arron, my own 12-part Blackjack comic strip, and revisited an earlier short story I had been allowed to write featuring Blackjack and another guy that I had created for the world of Blackjack.
Just like with my own creations, spending time with Blackjack got the ideas flowing, the writing going, and I found that Blackjack has a very clear say in what he would and wouldn’t do, say, and be.
It was the prewriting time that made the difference in all of these projects. If only we would prewrite in real life.
Right now, American culture is often in conflict because people aren’t listening to each other, respecting the differences that make us such a fascinating whole, embracing that we are all on variations of the same journey. What we are failing to do is give each other the time and attention and respect we each deserve.
Like above, so below.
If writers want to have any chance of creating work worthy of people’s time and attention, we should be watching and listening and trying our best to grow our minds to be able to reflect what we learn and think and feel in our lives in the work. But to do that, we need to respect those who are real, and then those who represent them in story.
Give your characters the time they deserve, spend time listening and being open to their possibilities, and the writing will come through dynamically.
So go hang out with others, real and fictional, and give them time and an open mind. We’ll all be better off for your efforts. 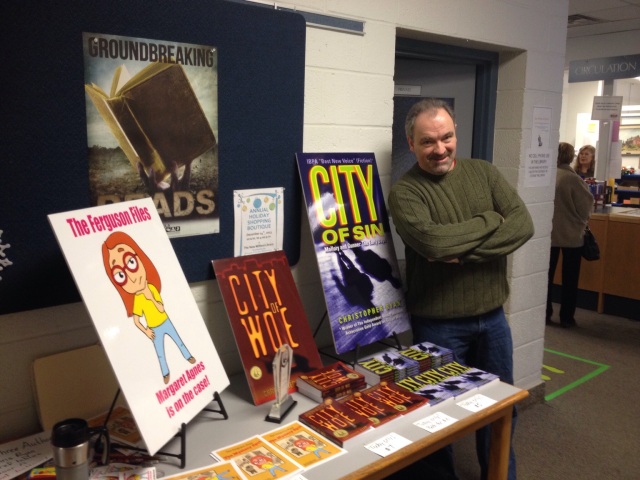 My name is Christopher Ryan. I am a former award-winning journalist turned high school teacher, and I have written since reading S.E. Hinton's THE OUTSIDERS when I was in elementary school. I have independently published an award-winning debut novel, CITY OF WOE, plus the prequel short story collection CITY OF SIN, the sequel novel CITY OF PAIN, a high school thriller novel GENIUS HIGH, and several high adventure novelettes for the Rapid Reads series featuring Alex Simmons' African-American adventurer BLACKJACK All are available via amazon.com, as is my children's book, THE FERGUSON FILES - THE MYSTERY SPOT. Additionally, I was nominated for a supporting actor award for my work in the multiple award-winning independent film, CLANDESTINE, from Feenix Films. I blog about writing, life, pop culture, the journey of learning to promote my independently published work, my efforts to secure a traditional publishing contract, and my career as a teacher.
View all posts by chrisryanwrites →
This entry was posted in America, comics, digital publishing, ebook publishing, fiction, film, independent publishing, pop culture, self-publishing, Uncategorized, writing and tagged #, # BlackLivesMatter, # prewriting, #AllLivesMatter, #authorlife, #BlackjackisBack, #characters, #writingtips. Bookmark the permalink.