Marvel’s Daredevil on Netflix Exceeds All Expectations But One

Yesterday, in one long and glorious binge, the goddess and I watched all of Marvel’s Daredevil Season One on Netflix. This was a wonderfully indulgent experience I thoroughly enjoyed and will never repeat.

First, the show is almost perfect. The casting is outstanding, with knockout performances by Charlie Cox, Vincent D’Onofrio, Debrorah Ann Woll, Elden Henson, Rosario Dawson, and, quite frankly, almost the entire cast. Cox and D’Onofrio are particularly impressive, with each making intriguing acting choices throughout. Cox downplays his enhanced powers and makes Matt Murdock an icon of rising above perceived limitations while D’Onofrio’s Wilson Fisk is a study of a potentially decent man drowning in past traumas. Woll as Karen Page and Henson as Foggy Nelson also deliver the goods, giving depth and humanity to often two-dimensional supporting characters. Dawson radiates her usual warm approachability, and we found ourselves wanting so much for her to win in every situation, whether it be to survive or be kissed.

The scripts are tight and fresh and believable and grounded, with many in the production team coming from the Joss Whedon school, having cut their teeth on Buffy and Angel. But this isn’t sunny California, and these people don’t make with the witty all that often. The scripts win on an entirely different level of character and danger and pathos – with a sizable amount of spirituality throughout. Tackling the big questions with feet planted firmly in reality is one of this series’ many delights. Another is the possibility of this series being interpreted as a treatise on the twisting of truth that is modern politics and class warfare. Quite often, the question here is what kind of world do you want to live in and what are you willing to do to get it?

The direction is gritty and intense and often evokes the New York City of the young Martin Scorcese (love those tracking shots!) The pacing is fantastic but probably works better when seen one or a few episodes at a time as opposed to over 13 hours straight. The great triumph here is the production team’s incredible multi-level achievement of nailing New York City as an international place of business while simultaneously being made up of small neighborhoods with their own identities and loyalties. The scope is huge but the focus is local, and both work.

The villains are realistic because their horrific underpinnings are exposed with masterful patience and an exceptional use of motifs. The heroes are organically flawed, struggle believably, and make mistakes that enhance the fresh feel of this story rather that expose tropes and cliches. I am grateful to the entire show staff for succeeding in this area.

One disappointment: the gorgeous opening credits sequence makes a promise that the show does not fulfill by culminating with a classic image of Daredevil in the pure red costume (see below). The final costume is not that, and while I understood it as part of the ongoing challenge of making comic book heroes look plausible in live action, what they settled on looks like one of the least-loved costumes DD has even worn. Having spent all that time seeing the opening credits as foreshadowing of what would eventually leap across the screen, when the iconic costume wasn’t entirely delivered, late in the last episode, it knocked me out of the narrative for the first time in the entire journey.

However, overall, this series is a must for action fans. I know I will rewatch this season very soon, and look forward to experiencing more with these characters.

That, my friends, is success. 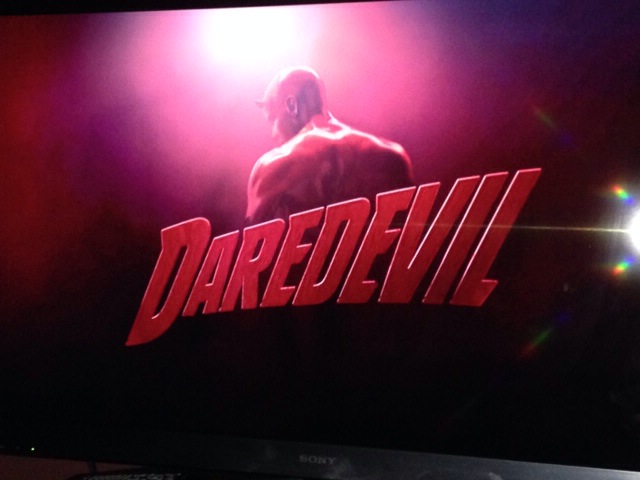 I do my best to tell fast-paced stories with humor and heart. My fiction work is available on amazon.com. Here, I’ll write about the sources for those stories from what I read, watch, listen to, and observe to my experiences as a former award-winning journalist, high school teacher, actor, and producer.
View all posts by chrisryanwrites →
This entry was posted in America, comics, fiction, film, Marvel, Marvel Cinematic Universe, pop culture, super-heroes, writing and tagged #Daredevil, #Daredevilonnetflix, #Marvel, #marvelshare, #MCU, #Netflix, #popculture. Bookmark the permalink.